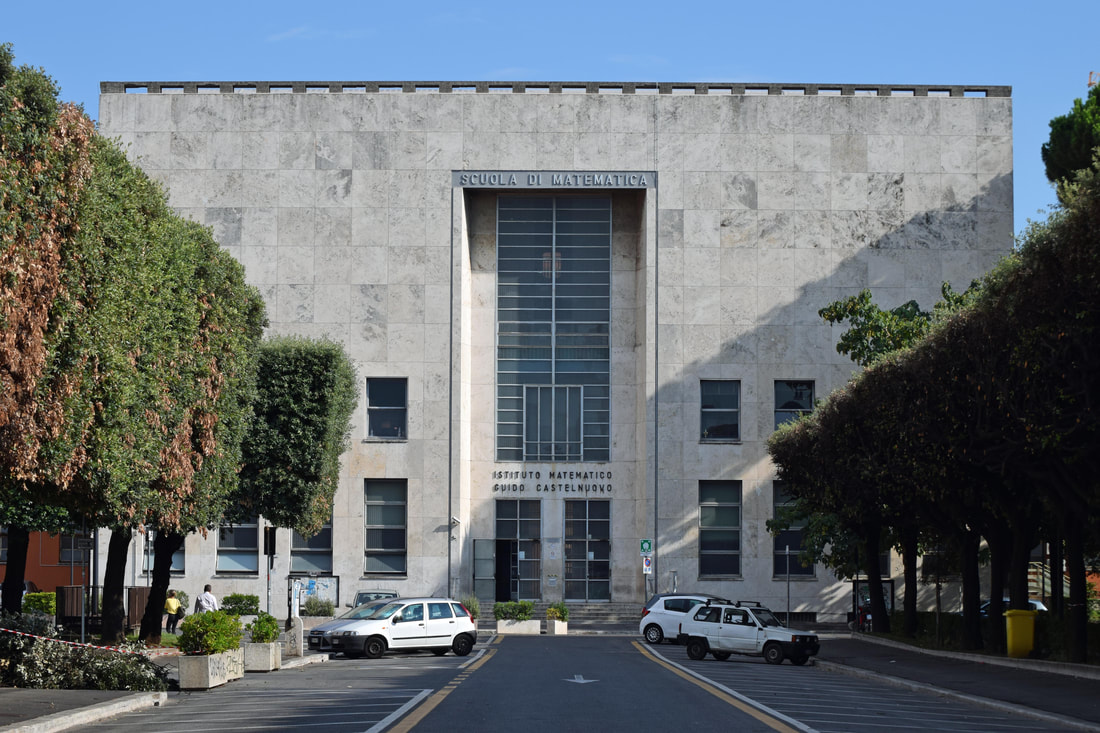 Gio Ponti’s School of Mathematics at Sapienza University Campus is one of the highest expressions of Italian Modern Architecture. Designed by Ponti in every detail – from structure to interiors and artistic pieces - this is a true Gesamtkunstwerk, internationally acknowledged among the most significant Italian architectural expressions, albeit unknown to most of the public and still very poorly investigated. Ponti’s School of Mathematics is in fact one of his least considered work although its design and achievement marked an important changeover in his activity, shifting from a ‘Milanese classicism’ to a more explicit Modernism.
Since its construction in 1935, the building holds its original function housing research and teaching activities: having survived the 1943 bombings of Rome and various transformations, in more than eighty years of life it has faced many alterations and additions, especially due to the dramatic changes occurred in university life, organization and increase in the number of users. Still, its overall conditions of the building are fair as it retains most of its original fabric. Most transformations have mainly consisted in maintenance works and in some consistent additions, but few demolitions have occurred.
Ponti’s architecture is still powerful and vibrant; inner and outer spaces are still attractive, functional and dynamic, and host various cultural activities. Albeit listed as historic monument, further changes are still on-going in lack of the necessary knowledge base and without the due conservative attention. The building is therefore needy of scientific research, investigations, surveys, insights and care, as essential conditions to a preliminary value assessment and a consequent appropriate conservation plan.
The grant offered by The Getty Foundation ‘Keeping it Modern’ program represents a strategic chance to trigger a different approach towards this building and, in general, towards buildings at Sapienza university campus of the same period. These all have been suffering lack of attention: symbols of a damned epoch, they are often still considered only in terms of mere usable surface. The research made possible throughout this grant aims a focussing the attention not only of distinguished experts in the conservation field - most of which belong to “Sapienza” - but also of the general scientific community, of students, staff and citizens, triggering a virtuous circle of awareness and appreciation. This bottom-up movement would finally re-orient the general attitude and encourage the public administration to reorganize current “management plans” into more sensitive “conservation programs”. Furthermore, the building needs to re-contextualized in an international circuit of cultural appreciation and scientific knowledge, enhancing the historical and critical understanding of the XXth century architectural heritage and contributing to its conservation and transmission to future generations.
Dr. Simona Salvo (Italy, 1967)  -  Architect, Master of Science, PhD in Architectural Conservation (2000), assosiated Professor at 'Sapienza' University of Rome, Salvo is member of the Department of Architectural History, Survey and Conservation and of the Doctoral Board in "Architectural History and Conservation”.

Her fields of interest are focussed on theoretical and methodological issues concerning architectural conservation, especially of modern architecture, and on the dissemination of restoration principles and theories in today's globalized culture. Within this framework, she cultivates and is responsible for cultural, scientific and academic international cooperation with several international academic institutions in Europe, China, US and Brazil, where she has been visiting professor at various stages. She has been member of research teams for various research projects of national and international relevance and has participated to a number of conferences, seminars and workshops on architectural conservation, especially on the conservation of modern and contemporary architecture.

On the basis of a long-lasting research activity, she has recently been awarded by The Getty Foundation with the 2018 Keeping It Modern Grant to coordinate research and conservation planning on Gio Ponti’s School of Mathematics at Rome’s university campus.
She has published largely on scientific reviews and encyclopaedias and has authored articles and books. Salvo is also a registered architect and has practiced professionally in the field of architectural conservation, experiencing - among other works - the restoration of the Pirelli Building in Milan in 2002-2004.